A few days ago they contacted me to perform a forensic analysis on an intrusion in a Big Data cluster. Apparently they had committed a set of machines and installed cryptocurrency miners in all the nodes of the cluster.

I leave here a review of the activities I did to discover how they agreed and what the pirates did.

The first action before getting into flour is to execute a script to recover the maximum information about the volatile data and after unplugging the machines from the stream, it is not convenient to stop the machines in an orderly manner because there are some crackers that leave a running process that in how much they detect the fall of a network interface eliminate all the information of the system.

In that volatile data collection script you have to recover data from the processes that are executed (ps), open files (lsof), network connections (netstat), executed commands (lastcomm), accesses (who) …

Another action to take if you have access to the cluster from the internet is to scan from ports to the public IP.

In a first analysis of these data and I find that there is a process that runs on all cluster datanodes that consumes 95% of the CPU, that system administrators have not identified and the owner is the user yarn that is the process manager, memory, CPU of the Hadoop cluster, clear candidate to be a malignant process and very skilled the cracker since any process uploaded to Yarn automatically runs in all nodemanager of the cluster.

The file that was executed no longer exists in the system.

I check in the logs the ssh accesses and the history of the yarn user commands. Nothing unusual is appreciated.

Checking the yarn logs (/var/log/hadoop-yarn/hadoop-cmf-yarn-RESOURCEMANAGER-XXX.out) are the start and stop logs of these processes.

Also in the output of the lsof it is shown that the source file (/ tmp / jav) was deleted.

What the Cloudera Manager says

I check what information there is in the Cloudera Manager and in the YARN console for those dates and there are continuous executions of Yarn processes of short duration that do not finish. 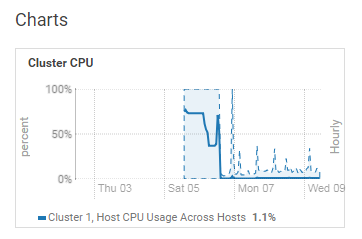 With the mac-robber and mactime tool I review the access, modification and executions of all files in the period that the CPU starts to be 95%.

In those directories, yarn stores the binaries that it executes, so I have the ideal place to search for clues of what has been executed.

He threw a strings on the binary and I find ugly things.

With that command you are downloading a file on the server.

There we have the culprit:

This script the first thing that it does is eliminate the processes of the competition in the mining, wants to have the cluster for the solito.

Then check if it is already running and if so, do not continue.

Then it recovers an IP from which the malware will then be downloaded, possibly because the websites with malware change rapidly and because it will interest you to change IPs from time to time in case the SysAdmin finds it suspicious and denies access.

And finally, it downloads two files, the binary that performs the mining, and changes its name, and the configuration file. Execute the binary and delete the two files.

I also download the w.conf file to continue gossiping.

The xmrig file is a miner of the Monero cryptocurrency (XMR) https://github.com/xmrig/xmrigknown to be more anonymous than Bitcoin (BTC) or Ethereum or others, and the stratum + tcpprotocol is a classic coin virtual

So “our” cracker has made the intrusion to install programs that miner Monero and make money thanks to the reward that gives this currency for the processing it brings to the XMR network.

How did it get into the system?

Known the whole plan of the malware once in the system what interests us to know is how it has been able to sneak inside.

On top of that what we have so far is that in the logs of access logs and executed commands nothing suspicious appears and in the logs of yarn does not indicate how that binary has come to be deployed.

The scanning of ports with the nmap showed us that many ports were being exposed to the internet and that offers a range of attack possibilities. So seeing that I was very lost, I chose to look around.

We prepare a similar cluster, we start it and put a sniffer to store all the network packets.

In less than an hour I already had infectious processes running in the cluster and with the user yarn. I stopped the cluster, I downloaded the dump, I opened it with the wireshark program and proceeded to look for suspicious text strings, which appeared soon.

Port 8088 is the one used by the Yarn Resource Manager Web.

But the request that is being made is about / ws/v1/cluser/apps that accessing the Hadoop documentation tells us that it is a REST API of YARN to handle applications.

Here is the key to how they are managing to register the process, they are using the API of Yarn that is exposed on port 8088, to register the application that is responsible for executing the curl that lowers the malvare and executing it in all the worker nodes of the Big Data cluster.

Initially published on Linkedin and copied on this blog so that it has visibility for non-Linkedin users.